Senior year.
Three girls. Three guys.
Truth and consequence.
Broken trust and shattered hearts.
Lost innocence and new experiences.
One more year before running away.
One more year to save her.
The countdown begins.

When Maximillian Sanders moved to Greyford, he had three goals: mend the broken relationship with his sister, keep her safe, and get into a division one college, playing hockey. There he meets the girl who breaks his heart and turns his world upside down, and it’s her best friend who helps pick up the pieces.

Brook Taylor learned the hard way that in order to survive this ugly world, she needed to live by her own rules. Then she meets Max and for the first time, she’s tempted to break them. He’s off limits, and she has a plan that doesn’t include a hot hockey player.

He says he wants her, but she can see the truth in his eyes. She should have just followed her rules and guarded her heart.

Those three little rules were supposed to save her, until she broke them all.

Rules was the most anticipated book of the entire series for me. I have been dying for Brook and Max’s story and this did not disappoint! This story was heartbreaking, emotional and truly beautiful. I devoured this book. I was completely drawn into Brook and Max’s life from the very beginning to the very end!

Brook is a survivor and a fighter. She has also been a mystery to everyone in her life and even throughout the series. There was so much more to her story than I ever could have expected. It was so emotional and I felt for her, but I also couldn’t help but smile for how strong she really is for overcoming everything. Max is the opposite of Brook, however, he isn’t without his own struggles in life. I loved the two of them together. They were an unlikely couple who were completely perfect for each other. They both found ways to help each other in their struggles.

There was some overlap between the previous books in the series in this one, but you got a different point of view of the scene. I didn’t feel like that took away from the story or felt repetitive in any way. It helped to get the full timeline of Brook and Max’s relationship.

I am sad that this series is over but I am so happy with how this series ended. Rules is a heartbreakingly emotional story that will rip your heart to shreds but then slowly mend it back together. This book and this series are a MUST READ! 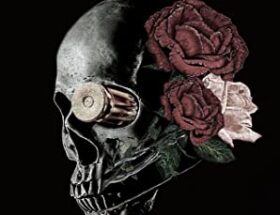