Nothing to Fear, book two in the steamy and action packed Final Hour Series by Juno Rushdan is available now! 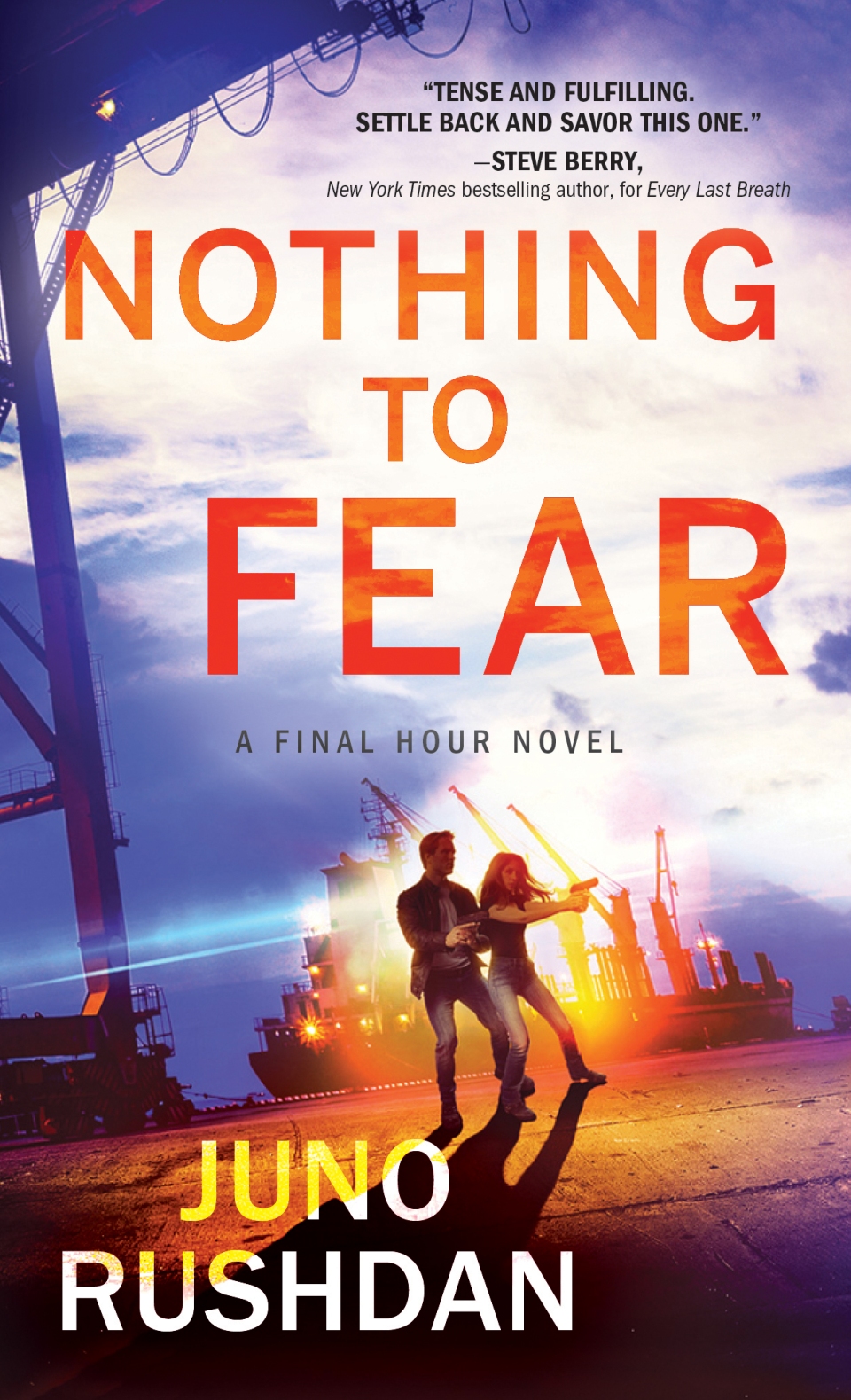 Lives are on the line

National security is at risk

The clock is ticking

Fearsome Gray Box operative Gideon Stone is devoted to his work and his team. He’s never given reason to doubt his loyalty…until he’s tasked with investigating Willow Harper, a beguiling cryptologist suspected of selling deadly bio-agents on the black market.

Thrust into the crossfire of an insidious international conspiracy, Gideon will do anything to keep Willow safe…even if that means waging war against his own. With time running out, an unlikely bond pushes limits—and forges loyalties. Every move they make counts. And the real traitor is always watching… 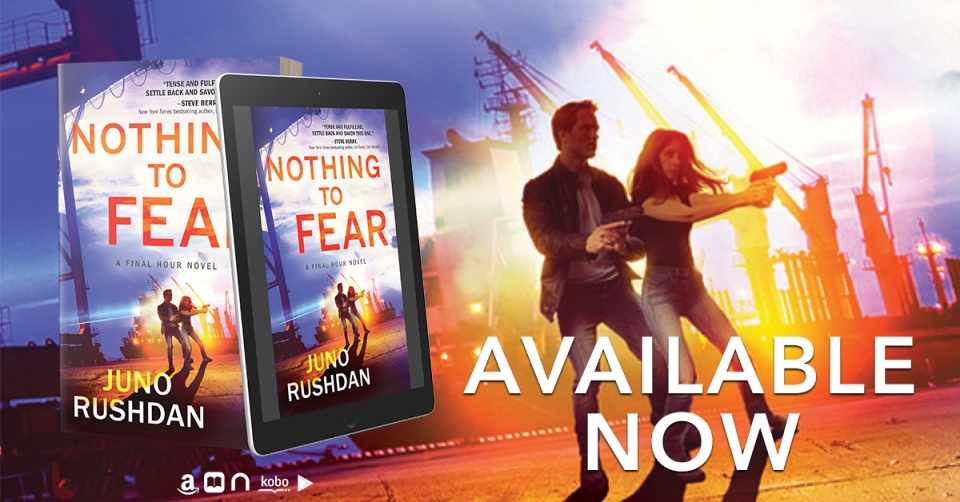 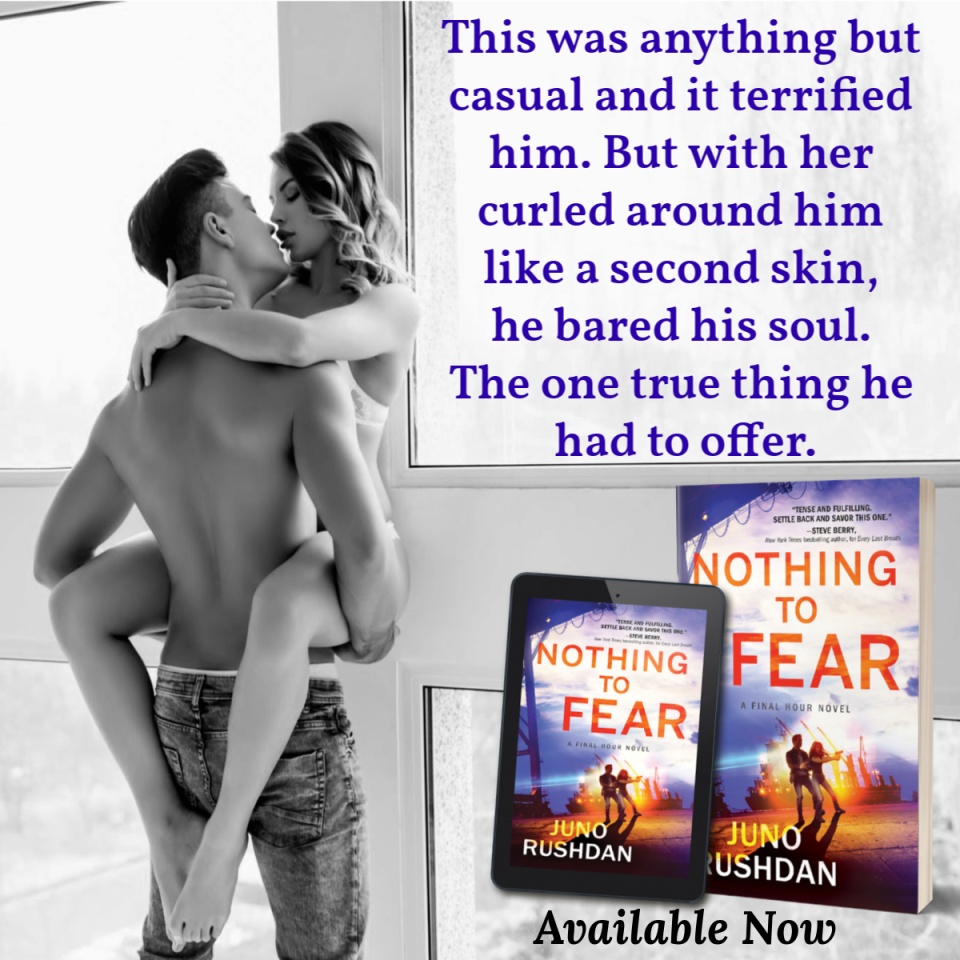 Start the Series with Every Last Breath

The pained sounds from Willow were real and had the inside of his chest twisting. He hated how her life had been turned upside down. Over the last few hours, he’d asked a lot of her—high-pressure, high-risk things. She’d handled all of it with grit and trusted him with little explanation. It bumped his admiration of her several notches higher. The absolute last thing he should do was go back in the other room, but her crying turned to sobbing, and he didn’t need her falling apart. He threw his T-shirt on, set a five-minute timer—estimating it’d take longer than two to console her but not giving himself enough time to succumb to temptation—and stepped into the bathroom. Sanguine hair dye smeared the edge of the white tub on his right, making it look like a bloodbath. Plastic gloves lay on the floor. Leaving the door ajar, he pivoted left. Willow turned to face him, trembling in front of the sink and mirror. Water dripped from her dark-red hair in rivulets down her delicate body. Her flimsy gossamer underwear was see-through. Blindsided, he stiffened. He pinned his gaze on her face, refusing to veer for a second below her neck. “I don’t look like me.” Tears spilled from her eyes. Unable to stop his feet from moving closer, he went to touch her but thought better of it and drew his hands back to his sides. “I-I hate this hair.” She burst into a series of hiccupping sobs. “None of this is me. Running. Dodging bullets. Stealing cars. Being a fugitive. This hair.” Her raw vulnerability gutted him. He had to say or do something—only a heartless asshole wouldn’t comfort her—but he was frozen in place. “Please, don’t cry.” She reached for him. He couldn’t avoid the collision of contact as she fell against his chest and pressed a palm to her mouth. Or perhaps he didn’t want to. He wrapped his arms around her shivering body and held her, cradling her head against his sore sternum. She was warm, so warm and soft. Her fear was palpable, tearing him up on the inside. She really started sobbing as if she’d been holding back a moment ago. Tightening his embrace, he shushed her and stroked her hair. “Gideon, I can’t do this. I don’t know how. I need things to go back to being normal. I need normal.” “You can do this. Your hair changed, not who you are. I see you, Willow.” She blinked up at him. He wiped the tears still streaming with his fingertips while keeping an arm around her. “Same hazel eyes that can’t decide if they want to be brown or green.” He brushed his knuckles across her cheek, a whisper of touch, and she leaned into his caress. “Same kind spirit.” Her sobs slowed, her breathing steadied, her body growing calmer. “You’re a survivor.I see you.” He skimmed her lower lip with the pad of his thumb, heat burning his face. She stilled, like she was holding her breath the same as him. He’d been attracted to scores of women…and then there was this. Not mere attraction but a draw far stronger and more intense. Kissing her would be a catastrophic mistake. An epic disaster. But only a blind monk would have the willpower to resist. Her hands flew to his cheeks as she rose on her tiptoes and yanked his mouth down to hers. Their lips locked—his ability to think rationally shut down on impact—and their tongues tangled in a sweet, filthy slide of a kiss. His heart kicked into a frantic pounding like machine gunfire against his breastbone. On a sharp, mingled breath, it turned deeper, hot and hard and hungry. Her supple body pressed tight to his, her leg hooking on his hip like she wanted to climb him. All her soft warmth ground against the growing bulge in his pants. Every single point of connection sparked more heat. He had to stop this, stop her, stop himself somehow. Then she slid her hand along his torso, down to his erection. He nearly burst from his skin. Gripping the nape of her neck and her hip with his other hand, he jerked her closer. The hard suction of her mouth, the way she licked and laved, tied him up in knots. Shuffling her back against the wall, he palmed her ass and caressed her breasts, flicking a thumb hard over her nipple. It registered on some distant level when the thin mesh of her bra tore in his rough hands that he was being too aggressive. But her moans grew throaty and her hips rocked against his. The absolute last thing he’d do was take her in a rush, in a bathroom, without condoms, when he needed to protect this scared, trusting woman from any danger. And that included him.

Juno Rushdan draws from real-life inspiration as a former U.S. Air Force Intelligence Officer to craft sizzling romantic thrillers. However, you won’t find any classified leaks here. Her stories are pure fiction about kick-ass heroes and strong heroines fighting for their lives as well as their happily-ever-after. Although Juno is a native New Yorker, wanderlust has taken her across the globe. Fortunately, she is blessed with a husband who shares her passion for travel, movies, and fantastic food. She’s visited more than twenty different countries and has lived in England and Germany. Her favorite destination for relaxation is the Amalfi Coast, Italy for its stunning seascape, cliffside lemon groves, terraced vineyards, amazing pasta, and to-die-for vino. When she’s not writing, Juno loves spending time with her family. Exercise is not her favorite thing to do, but she squeezes some in since chocolate and red wine aren’t calorie-free. She currently resides in Virginia with her supportive hubby, two dynamic children, and spoiled rescue dogs. Check her out on Instagram, Facebook or follow her on Twitter or BookBub. She loves to connect with readers! She is represented by Sara Megibow of KT Literary. 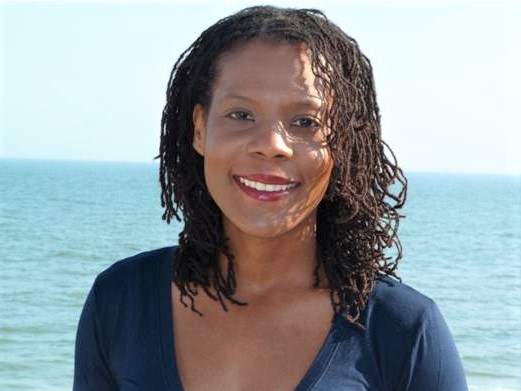 REVIEW : Finally Yours by Claire Raye